The rivalry between mobile network operators over network coverage availability has rumbled on for more than a decade, as they compete to provide the greatest UK coverage. The current state of connectivity coverage in the UK is somewhat mixed. Network coverage blackspots or ‘not-spots’, as they are often referred to in the industry, deeply affect rural areas in the UK especially Scotland, Wales and Northern Ireland.

The plans for the Shared Rural Network hope to close the coverage gap and digital divide by dramatically improving connectivity nationwide, stimulating regional economic growth and greater connectivity. In this article, we seek to dispel the myth behind coverage, explore the differences between population and geographic coverage and show the progress made so far by the mobile operators (MNOs) towards a connected future. 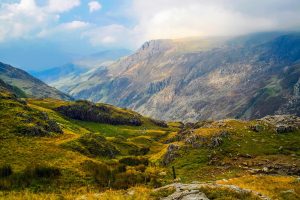 In 2019, the UK government proposed a £1 billion deal to solve poor network coverage across England, Wales, Scotland and Northern Ireland. The deal sets out to deliver 95% connectivity across the UK by the end of 2025. Hailed as a world first, it details plans for EE, O2, Three and Vodafone to invest in and share a network of phone masts, so that consumers can access coverage from their provider wherever they are in the UK.

This innovative solution named the Shared Rural Network will tackle the not-spot problem that plagues the UK’s countryside. Currently, poor mobile coverage is something of the norm in rural areas where often there is only coverage from one operator, not all. This deal looks to change this. It’ll allow the four major operators to host equipment on existing and new phone masts, improving the infrastructure significantly with additional mobile coverage for 280,000 premises and 16,000 kilometres of roads.

Ofcom, the UK’s communication regulator, holds high expectations for the Shared Rural Network and has varied the spectrum licenses in the 900MHz and 1800MHz bands to help the MNOs to bring the new coverage commitments into effect. To efficiently regulate coverage, Ofcom plans to conduct independent tests to check connectivity coverage as well as requesting test data from the mobile operators too.

The Shared Rural Network holds great promise and has set the expectation bar high too. It will change the way consumers work and play, improving signal strength for calls and download speeds. While for businesses, the prospect of a near 100% connected country holds immense economic opportunity. Connectivity will encourage businesses to operate from rural locations which were previously discounted because of their remoteness. In turn, this will stimulate growth in the jobs market and contribute to the UK economy.

Coverage is a generalised term. Ofcom defines 4G coverage on the minimum signal strength required to deliver a 95% probability of making a 90-second telephone call successfully completed and secondly, on a 95% chance of getting a download speed of at least of 2Mbps.

Great for improving consumer’s voice experience on their mobiles, but what about for commercial IoT?

As any IoT specialist will tell you, voice is an irrelevant measure of coverage for IoT. Metrics such as data access, speed and reliability are the ones that count.

Mobile network operators cite ‘population coverage’ when detailing their network coverage. But what is that and how does it differ to geographical coverage? We’re here to explain.

Population Coverage: The percentage of the total population covered by a mobile network signal.

Geographical Coverage: The percentage of total geography covered by a mobile network signal.

Simple right? Yet, fundamentally they are very different. According to the last Census taken in 2011, the majority of the UK’s population is based in England – accounting for close to 84% of the total population. Whilst Scotland holds 8.4%, Wales 4.8% and Northern Ireland at 2.9%.

Furthermore, the population is distributed unevenly. As you would expect large numbers dwell in the country’s biggest cities whilst the populace thins out in rural geographies. For example, in 2019 London was home to 8.982 million people, compared to St David’s city in Wales which has a population of just over 1,600 people. Stark comparisons.

So, when mobile network operators quote that they provide x% population coverage it is not fully representative of the UK’s network coverage nationwide. It merely considers where most of the population lives.

Currently, according to Ofcom’s Connected Nations 2019 report, 66% of the UK landmass has outdoor 4G coverage from all four operators; however, this area includes only 96% of UK premises. For the Shared Rural Network to deliver on its promise, it must aim for 95% geographical network coverage, but there’s some way to go yet. A superior, immediate solution to close the gap on connectivity and truly solve the not-spot problem lies in next-generation virtual MNOs (VMNOs), which tap into the intersection of all four mobile network operators to achieve close to 100% connectivity levels. 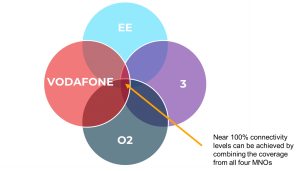 The Truth about Coverage 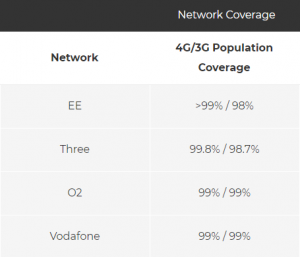 solutions they provide across the country, a mixture of 3G, 4G and 5G (as of late). And these coverage details do not necessarily touch geographical locations for radio signals. For example, population coverage is claimed and measured by mobile operators here (see image to right). Yet 3G/4G coverage by geography falls some 30% below these statistics.

Opensignal is one of the independent global organisations for analysing consumer mobile experiences and focuses on providing real coverage measurement and quality assurance provided by mobile operators in the UK.

On Opensignal’s website, it’s easy to track metrics such as download speed Mbps, latency experience and 4G availability. These metrics are fundamental for IoT projects success.

As we can see in the table above, a wide range of metrics contribute to overall coverage experience. Typically, MNOs claim outdoor coverage, so a high proportion of these statistics represent outdoor coverage rather than indoor. Three-quarters of the MNOs listed above cannot provide availability for more than 90% of the time, latency is widely experienced, and download speed is slow.

What’s clear is that no single MNO can always provide 100% network coverage availability. The figures above are a testament to this. Any businesses with IoT device estates distributed nationally (not to mention internationally) will, therefore, struggle to maintain device uptime working with this coverage alone. Businesses need ultimate flexibility in deployment and coverage should not dictate where devices are geographically located. IoT devices are often static and are unable to move to find the best coverage, such as vending machines or EV charge points that are in a fixed location.

To fill these gaping coverage gaps, a network agnostic IoT connectivity solution is required. A next-generation virtual MNO (MVNO) can flexibly offer national and international connectivity via localisation partners, interconnects and roaming. So, if one MNO experiences network downtime, the IoT device can dynamically switch to another MNO provider to avoid any loss of connectivity and guarantee the best coverage available. Using this future-proofed method, businesses can rest assured that their device fleet has near 100% coverage availability at any given time.

A Connected Present and Future

A fully connected country spanning across the four nations of the UK… that’s the Shared Rural Network vision.

We will have to wait and see if it becomes a reality.

Regardless of the outcome IoT devices still critically require ubiquitous connectivity. Although this article has focused on the UK’s state of mobile network connectivity coverage, this is a situation repeated with networks and MNOs all across the world, making it all the more vital that a solution helps to close the coverage gap not just in rural areas but beyond.