LoRa or Cellular for IoT: Which is the Right Choice for You?

The enormous potential of IoT is matched by the enormous complexity of achieving ROI with IoT deployments. From designing secure, resilient devices to creating applications that derive real value from the device data, there are many choices and compromises along the journey to a successful deployment.

One of the major choices is connectivity. There’s a wide variety of options, with differing levels of adoption and availability, energy efficiency, cost, quality of service and security. It’s not surprising companies find it hard to find the right connectivity technology – but the wrong choice can wreck a business case. For example, ROI can be wiped out if batteries in remote devices don’t last as long as expected, or the chosen network doesn’t support the real-time communication required for mission-critical applications.

Two prime connectivity contenders for IoT are cellular networks and LoRaWAN®. This article compares and contrasts these technologies and provides some pointers for deciding which one best suits your IoT requirements.

Of all the billions of IoT devices in the world (estimated to reach nearly 31 billion in 20251), many billions will be simple devices sending small amounts of data at infrequent intervals. Examples include sensors recording temperature, humidity, and soil conditions, or reporting a status, such as whether a switch is on or off, or if a parking space is occupied or vacant.

Many of these devices are located in remote or inhospitable locations, such as oil rigs, farmland, underground, or basements. They usually have one or both of these characteristics:

Connectivity technologies that can meet the needs of these LPWA IoT devices and applications are of particular interest to many companies.

The LoRaWAN specification is a LPWA networking protocol. As it’s an open specification, anyone can implement the protocol themselves on their own equipment. The protocol uses the proprietary LoRa radio modulation technology, which is owned by Semtech.

LoRaWAN operates in the unlicensed ISM (industrial, scientific, and medical) band, over a range of approximately 5-10km, and needs line of sight between devices and gateways. Its main purpose is for battery-operated devices to send small amounts of data at infrequent intervals to the internet.

LoRaWAN is supported by the LoRa Alliance, an open, non-profit association with more than 500 members. It has a large ecosystem of developers producing LoRaWAN-based hardware and software. However, semiconductors are only available from Semtech or its licensees.

How does LoRaWAN work?

Devices broadcast data via radio waves to a nearby LoRaWAN gateway. The gateway forwards the data to an internet server, which relays the data to an application in the cloud or a data centre.

LoRaWAN networks can simplify IoT setups, as it’s easier to install a few gateways in a contained area rather than installing many Wi-Fi routers or fitting SIM cards in all devices.

According to the LoRa Alliance, there are LoRaWAN networks in over 160 countries, mostly local installations.

Some network operators, such as Orange in France, operate a public LoRaWAN network.

Advantages: subscribers don’t have to invest in the network infrastructure or pay running costs for the operation and maintenance of the network.

Disadvantages: lack of choice and coverage both within local countries and regions, and internationally. Quality of service can decrease as the number of devices using the network increases.

Anyone can set up their own LoRaWAN network of gateways and servers that can only be accessed by their own devices.

Advantages: freedom to install networks whenever and wherever they are required, with control over the network capacity and quality. Data stays within the private network.

Some organisations and alliances operate community networks or allow third-party access to their own networks.

Advantages: low investment in infrastructure and running costs, although subscribers might have to install a gateway if there’s no coverage in their area. Use of community and developer ecosystem for support.

Disadvantages: lack of choice and coverage both within local countries and regions, and internationally. Quality of service can decrease as the number of devices using the network increases. Community networks usually limit data volumes, don’t offer guaranteed levels of quality, and may have additional security and data protections risks.

What are the Cellular IoT connectivity options?

Cellular networks are based on open, global industry standards, use licensed spectrum, and are always operated by wireless network providers. As well as the well-known 2G, 3G, 4G and 5G cellular standards, the GSMA has introduced two additional LTE standards, NB-IoT and LTE-M. These are primarily designed for LPWA use cases but are still in the initial stages of rollout. 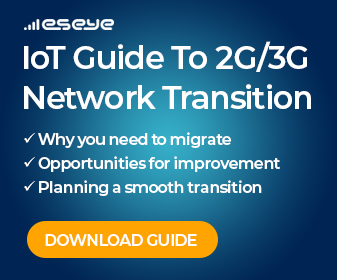 GSM is the second-generation mobile telephone system and includes 2G and 3G. Primarily designed for voice, the standards also support SMS and GPRS data. They are proven, widely adopted standards, with hardware available at low cost.

Many mobile operators are in the process of shutting down 2G and 3G networks in favour of newer technologies. Before choosing a 2G or 3G service, it’s essential to make sure the service is available for the timespan and locations required.

LTE is the 4th generation mobile network system. Introduced in 2012, 4G is primarily designed for better scalability and wireless broadband. Although it’s not as wide range as GSM, it provides much higher data rates – comparable with Wi-Fi.

The latest standard is 5G. With bandwidths of up to 1 Gbps, 5G enables high speed communication with high capacities and very low latency. It can be used in mission critical applications, such as autonomous vehicles, as well as applications such as VR, AR, gaming, and any use cases requiring a real-time response.

The parallel operation of 4G and 5G promises greater capacity and faster network speeds in the future.

Designed specifically for IoT devices, NB-IoT has the following characteristics:

NB-IoT doesn’t support seamless handover when switching to another cell network tower. It can switch cells but must re-establish the connection, which takes more power. It’s possible to connect around 100k devices to one network cell tower, making it ideal for use in areas with high device densities and network usage.

LTE-M, also known as LTE Cat-M, is an extension to the LTE networks. Like NB-IoT, it offers a low speed, low power, long-range protocol for small bandwidth applications. Although it doesn’t provide the same length of battery life as NB-IoT, it offers a higher bandwidth, so is a good candidate for the use cases with higher volumes of data.

LTE-M is run on top of LTE base stations, making implementation more attractive for network operators as no dedicated hardware is needed. LTE-M can operate over a range of approximately 10-15km.

The power-saving capabilities, eDRX and PSM, can also be used with devices that connect to LTE-M networks.

Limitations of LoRaWAN and Cellular networks

Throughput is limited by national regulations to prevent network overload.

What is the duty cycle? The percentage of time that a channel may be actively occupied on the network. Unlicensed spectrum bands have severe legal restrictions on duty cycle. In Europe, the duty cycle restriction is 1%, which translates to a device having a maximum of 36 seconds every hour for transmission.

In the US, devices can’t be on air for longer than 400 milliseconds if the signal bandwidth is lower than 500 kHz. Devices might need to use frequency hopping to transmit their data successfully.

Duty cycle restriction may not be a problem during normal usage, where a device is only expected to transmit a daily status update payload of a few bytes but may be a real limiting factor during periods of high activity, when interference demands that a high percentage of packets are retransmitted, or in exceptional circumstances, such as pushing a new firmware version to a device over the air to secure a vulnerability.

LoRaWAN networks can suffer performance degradation from packet collisions and interference if there are networks operating in the same area or in high density device deployments. If the number of devices connected to a network is larger than the shared number of channels, increased collisions and packet loss is likely. In addition, other services, such as wireless alarm systems and remote controls, can operate in these bands, adding to the congestion.

Data loss means devices must re-transmit or reduce their payloads. Re-transmitting data uses more power, impacting battery life, while reducing payloads may be a problem for some use cases. This type of network issue can produce disappointing results, particularly if it wasn’t anticipated at the time of deployment, for example, if device density wasn’t an issue at that time.

With no restrictions on setting up LoRaWAN networks or adding devices, packet collisions and interference are likely to increase. Data loss can start to become an issue when more than just a few hundred devices are communicating, which can be a significant problem if deployments need to scale to potentially millions of devices, or if other devices are deployed nearby.

Setting up new network infrastructure, such as gateways, masts, and repeaters, can be costly and slow, with challenges around planning permission, backhaul provisioning and other complicated issues, particularly in dense urban areas.

Advantages of Cellular connectivity over LoRaWAN

However, there are choices and compromises that have to be made. All cellular networks offer higher bandwidths, lower latency, higher reliability, and better coverage compared to LoRaWAN. However, not all cellular networks are suitable for LPWA applications.

When to choose Cellular connectivity

Making the right choice depends primarily on the use case requirements:

Cellular connectivity has some significant advantages over LoRaWAN:

For most enterprises adopting IoT, security is a top concern. Vulnerabilities in poorly secured devices or networks can lead to hackers stealing data, disrupting services, or even taking control of remote assets.

It might seem that simple IoT devices, such as sensors, don’t need much protection. However, these devices can be recruited into vast botnets to use in DDoS (Distributed Denial of Service) attacks. Or malicious attackers could tamper with sensors to contaminate facilities such as water treatment plants or farmland, potentially causing a danger to life.

Security is a particularly difficult problem for LPWA devices, as constraints on bandwidth, physical size, and cost can make it challenging to implement robust security mechanisms such as authentication, encryption, and patching.

Cost is a critical factor in determining the viability of IoT use cases. LPWA module costs are likely to decrease as production volumes increase while network and connectivity costs depend on the type of network that is used.

All costs shown are approximate and correct as of July 2021

IoT deployments often have a planned lifetime of ten years or more. It’s critical to consider whether all the factors in a deployment can withstand the test of time of the required lifetime.

Key questions to ask when deciding on IoT connectivity:

With IoT, there’s no one size that fits all.

For many enterprises, the most important requirements for IoT network connectivity are coverage and quality. Given the issues with public and open LoRaWAN networks, the only currently viable option for LoRaWAN is to use a private network.

The different cellular standards serve a whole range of use cases. If the focus is on LPWA, the most viable, futureproof options are NB-IoT and LTE-M. However, the rollout of these networks is still in its early stages, with patchy coverage in many regions.

The table below summarises the main factors to consider when making an LPWA network connectivity choice.

Get in touch to speak with an IoT specialist

Paul is one of Eseye’s co-founders. With a background in senior design engineering, Paul’s focus is on ensuring his development, operations and support teams deliver solutions that work faultlessly in the field.

Paul was co-founder of CompXs, with Ian Marsden, and developed the world’s first IEEE 802.15.4 radio. Before CompXs, Paul was in senior radio design at Philips.